Digital Betacam (commonly referred to as DigiBeta, D-Beta, DBC or simply Digi) was launched in 1993. It supersedes both Betacam and Betacam SP, while costing significantly less than the D1 format. S tapes are available with up to 40 minutes running time, and L tapes with up to 124 minutes.

The Digital Betacam format records a lossless 2 to 1 DCT-compressed digital component video signal at 10-bit YUV 4:2:2 sampling in NTSC (720×486) or PAL (720×576) resolutions at a bitrate of 90 Mbit/s plus four channels of uncompressed 48 kHz / 20 bit PCM-encoded digital audio. A fifth analog audio track is available for cueing, and a linear timecode track is also used on the tape. It is a popular digital video cassette format for broadcast television use.

Another key element which aided adoption was Sony's implementation of the SDI coaxial digital connection on Digital Betacam decks. Facilities could begin using digital signals on their existing coaxial wiring without having to commit to an expensive re-installation.

The original Betacam format was launched on August 7, 1982. It is an analog component video format, storing the luminance, "Y", in one track and the chrominance, on another as alternating segments of the R-Y and B-Y components performing Compressed Time Division Multiplex, or CTDM. This splitting of channels allows true broadcast quality recording with 300 lines of horizontal luminance resolution and 120 lines chrominance resolution (versus ≈30 for Betamax/VHS), on a relatively inexpensive cassette based format.

In 1986, Betacam SP was developed, which increased horizontal resolution to 340 lines. While the quality improvement of the format itself was minor, the improvement to the VTRs was enormous, in quality, features, and particularly, the new larger cassette with 90 minutes of recording time. Betacam SP (for "Superior Performance") became the industry standard for most TV stations and high-end production houses until the late 1990s. Despite the format's age Betacam SP remains a common standard for video post-production. The recording time is the same as for Betacam, 30 and 90 minutes for S and L, respectively. Tape speed is slightly slower in machines working in the 625/50 format, increasing tape duration of one minute for every five minutes of run time. So, a 90 minute tape will record 108 minutes of video in PAL.

Betacam and Betacam SP tape cassette shells varied in color depending on the manufacturer. Many companies sold Betacam tapes, sometimes of their own manufacture, sometimes re-branded. Fuji, Maxell, Ampex and 3M were just some of the major brands to do so.

Betacam SX is a digital version of Betacam SP introduced in 1996, positioned as a cheaper alternative to Digital Betacam. It stores video using MPEG 4:2:2 Profile@ML compression, along with four channels of 48 kHz 16 bit PCM audio. All Betacam SX equipment is compatible with Betacam SP tapes. S tapes have a recording time up to 62 minutes, and L tapes up to 194 minutes.

This format compresses the video signal from approximately 180Mb/s to only 18Mb/s. This means a compression ratio of around 10:1, which is achieved by the use of mild temporal compression, where alternate frames are stored as MPEG I-frames and B-frames, giving rise to an IBIB sequence on tape.

MPEG IMX is a 2001 development of the Digital Betacam format. Digital video compression uses H.262/MPEG-2 Part 2 encoding at a higher bitrate than Betacam SX: 30 Mbit/s (6:1 compression), 40 Mbit/s (4:1 compression) or 50 Mbit/s (3.3:1 compression). Unlike most other MPEG-2 implementations, IMX uses intraframe compression. Additionally, IMX ensures that each frame has the same exact size in bytes to simplify recording onto video tape. Video recorded in the IMX format is compliant with CCIR 601 specification, with eight channels of audio and timecode track. It lacks an analog audio (cue) track as the Digital Betacam, but will read it as channel 7 if used for playback. This format has been standardized in SMPTE 365M and SMPTE 356M as "MPEG D10 Streaming".

HDV is a format for recording of high-definition video on DV cassette tape. The format was originally developed by JVC and supported by Sony, Canon and Sharp. The four companies formed the HDV consortium in September 2003.

Because HDV video is recorded in digital form, original content can be copied onto another tape or captured to a computer for editing without quality degradation. Depending on capturing software and computer's file system, either a whole tape is captured into one contiguous file, or the video is split in smaller 4 GB or 2 GB segments, or a separate file is created for each take. The way files are named depends on capturing software. Some systems convert HDV video into proprietary intermediate format on the fly while capturing, so original format is not preserved.

Conceived as an affordable high definition format for digital camcorders, HDV quickly caught on with many amateur and professional videographers due to its low cost, portability, and image quality acceptable for many professional productions. 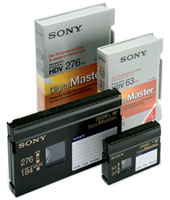 HDCAM SR, introduced in 2003, uses a higher particle density tape and is capable of recording in 10 bits 4:2:2 or 4:4:4 RGB with a bitrate of 440 Mbit/s. The "SR" stands for "Superior Resolution". The increased bitrate (over HDCAM) allows HDCAM SR to capture much more of the full bandwidth of the HD-SDI signal (1920×1080). Some HDCAM SR VTRs can also use a 2× mode with an even higher bitrate of 880 Mbit/s, allowing for a 4:4:4 RGB stream at a lower compression. HDCAM SR uses the new MPEG-4 Part 2 Studio Profile for compression, and expands the number of audio channels up to 12 at 48 kHz/24 bit.

DVCPRO, also known as DVCPRO25, is a variation of DV developed by Panasonic and introduced in 1995 for use in electronic news gathering (ENG).

Unlike baseline DV, DVCPRO uses locked audio and 4:1:1 chroma subsampling for both 50 Hz and 60 Hz variants to reduce generation loss. Audio is available only in the 16-bit/48 kHz variant.