The 1970s was a period when video recording became a major contributor to the television industry. Like many other technological innovations, each of several companies made an attempt to produce a television recording standard that the majority of the world would embrace. At the peak of it all, the home video industry was caught up in a series of videotape format wars. Two of the formats, VHS and Betamax, received the most media exposure. VHS would eventually win the war, and therefore succeed as the dominant home video format, lasting throughout the tape format period.

In later years, optical disc formats began to offer better quality than video tape. The earliest of these formats, Laserdisc, was not widely adopted, but the subsequent DVD (Digital Versatile Disc) format eventually did achieve mass acceptance and replaced VHS as the preferred method of distribution after 2000. By 2006, film studios in the United States had stopped releasing new movie titles in VHS format. On December 31, 2008, the last major United States supplier of pre-recorded VHS tapes, Distribution Video Audio Inc. of Palm Harbor, Florida, shipped its final truckload. As of 2010, most of the VHS tapes being produced are 6 and 8 hour blank tapes. 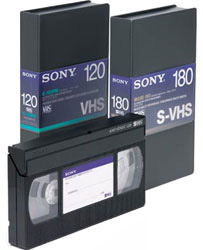 Super VHS is an improved version of the VHS standard for consumer-level analog recording videocassettes. It was introduced by JVC in Japan in April 1987 with the HR-S7000 VCR and certain overseas markets soon afterwards.

Super VHS VCRs and cassette tapes are nearly identical in appearance and operation but backward compatible with VHS tapes and recordings. Older VHS VCRs cannot play back Super VHS recordings at all but can record to an Super VHS tape in the VHS format. Many newer VHS VCRs offer a feature called Super VHS quasi-playback or "Super Quasi-Play Back"; (SQPB). SQPB allows VHS players to view (but not record) Super VHS recordings, though reduced to VHS-quality. This feature is useful for viewing Super VHS-C camcorder tapes.

To counter the introduction of the Super VHS format, Sony introduced Video Hi8 (short for high-band Video8). Like Super VHS, Hi8 used improved recorder electronics and media formulation to increase the recorded bandwidth of the luminance signal. Both Hi8 and Super VHS were officially rated at a luminance resolution of 420 horizontal TV/lines (560×480 in today's digital terms), a vast improvement from their respective base formats of 240 lines and roughly equal to laserdisc quality. Chroma resolution for both remained unchanged, at approximately 30 lines horizontal.

Both S-VHS and Hi8 retained the audio recording systems of their base formats; VHS HiFi Stereo outperformed Video8/Hi8 AFM, but remained restricted to high-end machines. In the late 1980s, digital (PCM) audio was introduced into some higher grade models of Hi8 (but never Super VHS) recorders. Hi8 PCM audio operated at a sampling rate of 32 kHz with 8-bit samples—higher fidelity than the monaural linear dubbing offered by VHS/Super VHS, but vastly inferior to VHS HiFi. PCM-capable Hi8 recorders could simultaneously record PCM stereo in addition to the legacy (analog AFM) stereo audio tracks.

All Hi8 equipment can record and play in the legacy Video8 format.